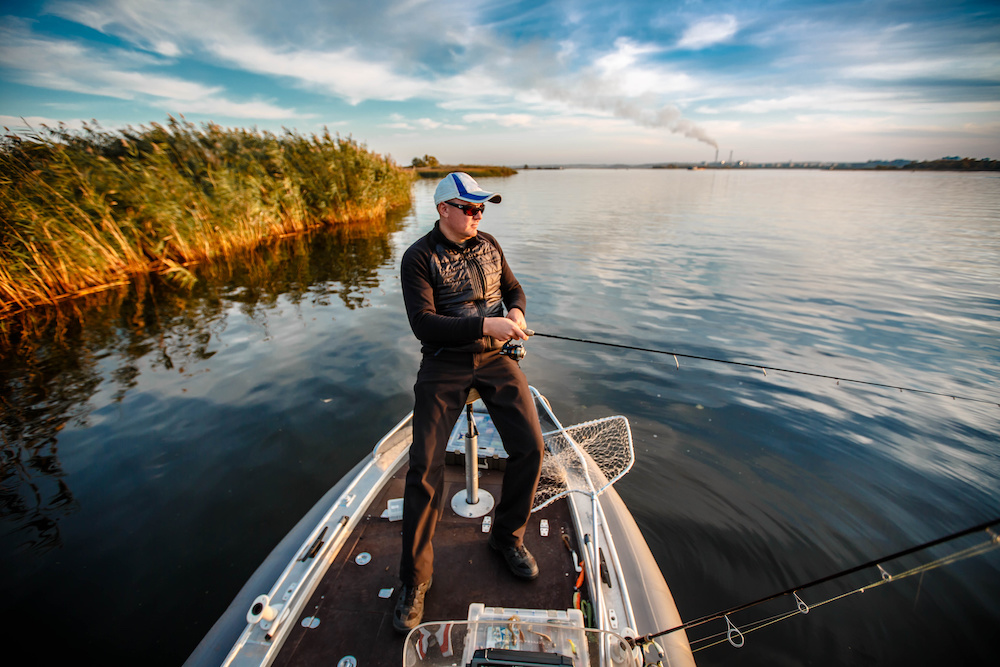 Garmin STRIKER Plus Reviews and Comparisons

Who would have thought that looking for fish could be so easy? Of course, that is all thanks to technology.

Anglers can benefit from all the modern fishing tools, but they can do a lot better with convenient fish finding and navigation equipment.

The company also has a wide array of products construed as wearable technology for any of these applications. 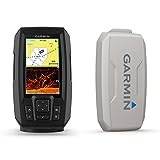 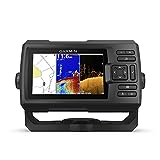 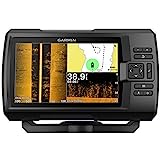 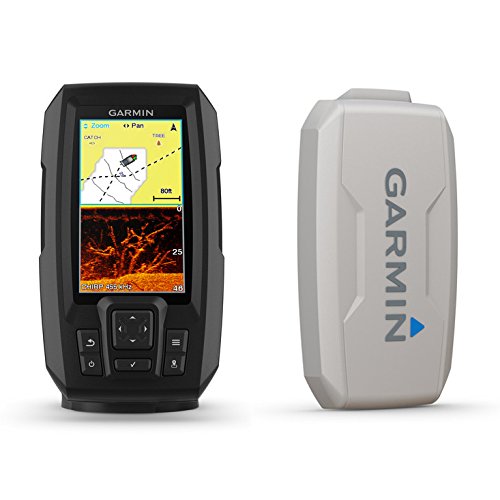 It comes with a transom mount transducer, power and data cables, a swivel mount, and some installation hardware and documentation.

The Garmin STRIKER Plus 4cv comes pre-installed with the Garmin Quickdraw Contours, a mapping software that lets you store up to two million acres of underwater contours.

With the built-in GPS, you can mark waypoints, set up routes, and monitor your cruising speed.

The GT20-TM transducer accompaniment of the Garmin STRIKER Plus 4cv has a traditional CHIRP with an effective range of 1,900 feet.

Alternatively, the Garmin ClearVu on the GT20-TM transducer has an effective range of 750 feet.

The GT20-TM transducer will mount on boats with a deadrise or transom angle between zero and 70 degrees for attachment.

The included connecting cable is a 4-pin wire that measures 20 feet in length. 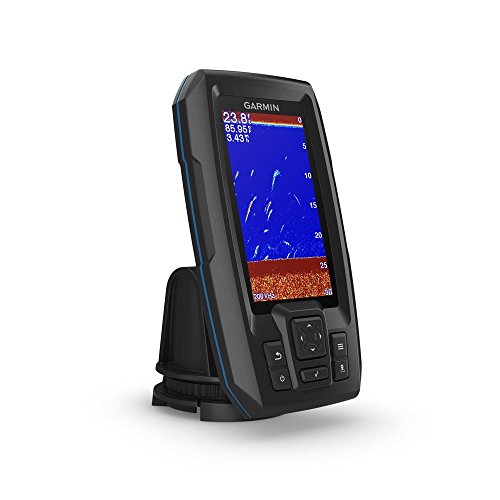 Measuring only 3.9 by 6.9 by 1.8 inches and weighing less than a pound, the Garmin STRIKER Plus 4cv is quite handy. You can move around your boat with the device in your hand.

Think of it as a rugged mobile phone or a walkie-talkie that you can carry around with you on your fishing trips.

Its size makes it an excellent option for a portable fish finder.

As you cruise the waters, the device generates very detailed contour maps of the places you’ve been.

The Garmin STRIKER Plus 4cv provides bottom lock readings by showing returns from the bottom up to the surface.

It also logs and graphs water temperature changes as you troll the waters.

The device has a sunlight-readable, bright display screen and an intuitive user interface.

The Garmin STRIKER Plus 4cv allows any user to mark origin points and abundant underwater spots so that you can go back to the same fishing spot the next time around.

Mark points such as docks, boat ramps, and piers whenever you leave the shore, and mark a spot on the map whenever you find some fish.

The built-in GPS also makes the Garmin STRIKER Plus 4cv display current trolling speed to let you know if you are trailing a bait or a lure at the right rate.

Apart from all of these features, Garmin built the STRIKER Plus 4cv to work in any environment.

Garmin designed the device with an IPX7 rating, which means it is water-resistant. You can submerge it in water up to a depth of one meter and up to 30 minutes.

The Garmin STRIKER Plus 4cv fish finder has a split-screen zoom and UltraScroll functionality.

Finally, with the Garmin STRIKER Plus 4cv, you won’t have to worry about software changes because the manufacturer's website provides updated manuals and software updates. 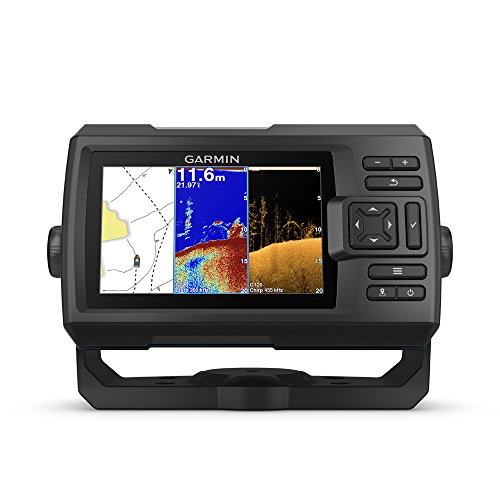 It is a five-inch GPS fish finder also equipped with industry-leading sonar paired with the Quickdraw Contours Mapping Software.

Like the 4cv, it uses CHIRP traditional and CHIRP ClearVu. The device can also create and store two million acres worth of maps showing underwater elevations accurate to one-foot changes in levels.

GPS options built-into the 5cv let you monitor boat speed, mark waypoints, and map out routes for your next fishing trip.

The Garmin STRIKER Plus 5cv has a transom mount transducer, power and data cable, a swivel mount, installation hardware, and an instruction manual.

It uses the same GT20-TM 4-pin transducer as the Garmin STRIKER Plus 4cv. 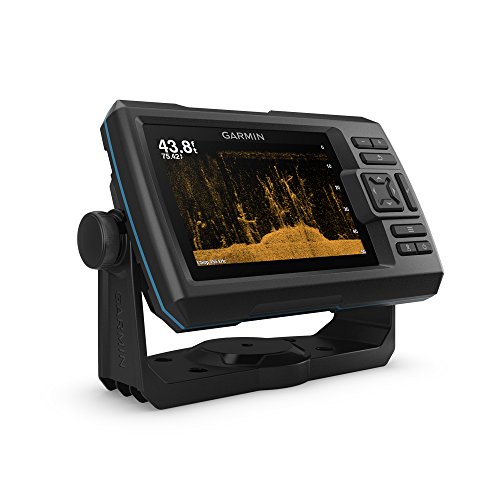 The Garmin STRIKER Plus 5cv measures 7.5 by 4.5 by 2.1 inches, and it has a five-inch landscape display, unlike the 4cv, which has a portrait orientation.

While the 4cv has its controls on a bottom panel below the 4.3-inch screen, the Garmin STRIKER Plus 5cv has its buttons on a right-side panel beside the landscape screen.

Aside from the larger display, orientation, and the control panel's location, the 5cv pretty much has the same features as the 4cv.

It has the same IPX7 rating for water resistance, and its transducer records water temperature changes and graphs them onto datasheets.

Another difference between the STRIKER Plus 4cv and 5cv is their weight and appearance. The Garmin STRIKER Plus 5cv weighs one pound, and it looks more like a small mountable TV. 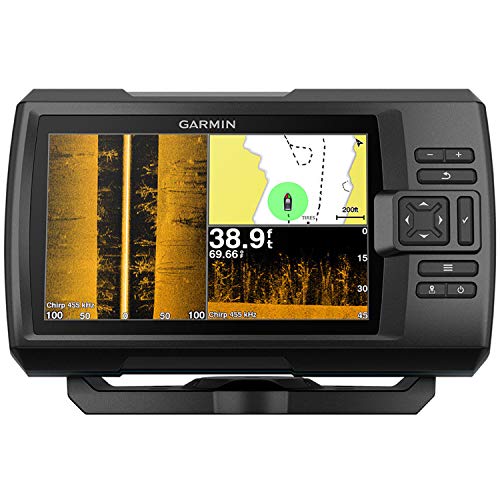 The included transducer is a transom mount GT52HW-TM.

The device also comes with a power and data cable, a 12-pin to a dual four-pin transducer adapter cable, swivel mount, installation hardware, and product documentation.

These three devices also share the sunlight-readable display and the contour map data storage of up to two million acres.

Conversely, in addition to traditional CHIRP sonar and CHIRP ClearVu, the Garmin STRIKER Plus 7sv has the CHIRP SideVu scanning sonar.

Another extra feature in the Garmin STRIKER Plus 7sv is the built-in Wi-Fi for accessing the ActiveCaptain app.

ActiveCaptain allows you to pair the Garmin STRIKER Plus 7sv with a compatible smartphone so you can access Quickdraw Contours Community.

In this online community, any user of the Garmin STRIKER Plus 7sv may transfer and share waypoints and get software update notifications.

With the ActiveCaptain app, you can access hundreds of maps uploaded by the Quickdraw Contours Community members. 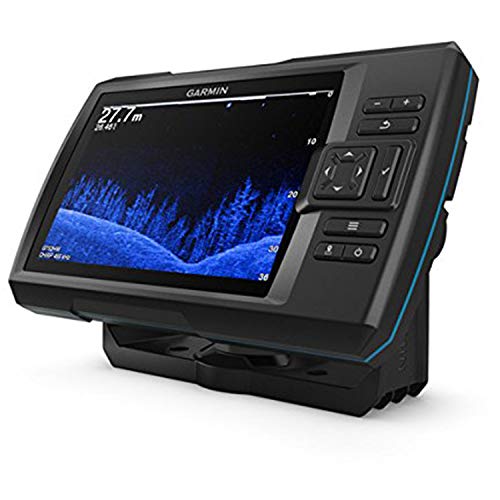 With Garmin ClearVu, you can use the sonar transducer to obtain nearly photographic images of what it scans under your boat.

While traditional CHIRP High Wide and CHIRP ClearVu can produce clear underwater images, CHIRP SideVu scans the sides of your boat. In effect, CHIRP SideVu widens the scanning range of the built-in sonar.

The Garmin SideVu function of the 7sv uses the built-in transducer to get crisp, clear images of whatever passes along the sides of your boat.

The GT52HW-TM transducer connects to the fish finder using a 20-feet dual four-pin to 12-pin adapter cable to make this possible.

Boats with transom or deadrise angles between zero and 70 degrees can securely hold the GT52HW-TM transducer.

With the GT52HW-TM transducer, traditional CHIRP has a maximum depth reach of 800 feet, and ClearVu and SideVu can scan depths up to 500 feet.

The Garmin STRIKER Plus 7sv measures 9.3 by 5.5 by 2.3 inches, and it features a seven-inch display.

Like the Garmin STRIKER Plus 5cv, the 7sv has a landscape orientation display using WVGA color and a control panel on the right side.

The Garmin STRIKER Plus 7sv display has the same 800 by 480 resolution as the 5cv, but because of the bigger seven-inch display, the 7sv offers better legibility.

Since it features a wider screen, the device is larger and weighs 1.7 pounds, almost another pound heavier than the 5cv.

Since the 7sv shares many primary features with the 5cv and 4cv, they typically share the same attributes.

All of the fish finders featured in this Garmin STRIKER Plus review are excellent and affordable options for having a CHIRP imaging sonar device.

Around five years ago, no one would have thought that sonar devices could be this cheap. All of these products might as well fall under the best fish finders under 500 dollars.

The bad news with the STRIKER Plus series is that they do not have any preloaded maps.

You will certainly save money by choosing a sonar device that does not have any preloaded maps, but it would be difficult to navigate through unfamiliar waters without them.

That said, the included Quickdraw Contours Mapping Software lets you build your own maps from scratch.

Additionally, you can download existing maps onto these devices using the ActiveCaptain app.

With all the available features on each STRIKER Plus series fish finder, they make an excellent addition to existing navigation equipment any angler might already have.

The Garmin STRIKER Plus 7sv would be the ultimate choice among these three products because of the large display and Wi-Fi connectivity.

Wi-Fi is a great development for any fish finder because it allows the user to connect with wireless devices such as mobile phones, tablets, and wireless networks.

Using this connectivity feature would make it much easier to download maps and transfer data for peer review and analysis.

The Garmin STRIKER Plus 7sv is one of the most affordable seven-inch sonar fish finders available on the market.