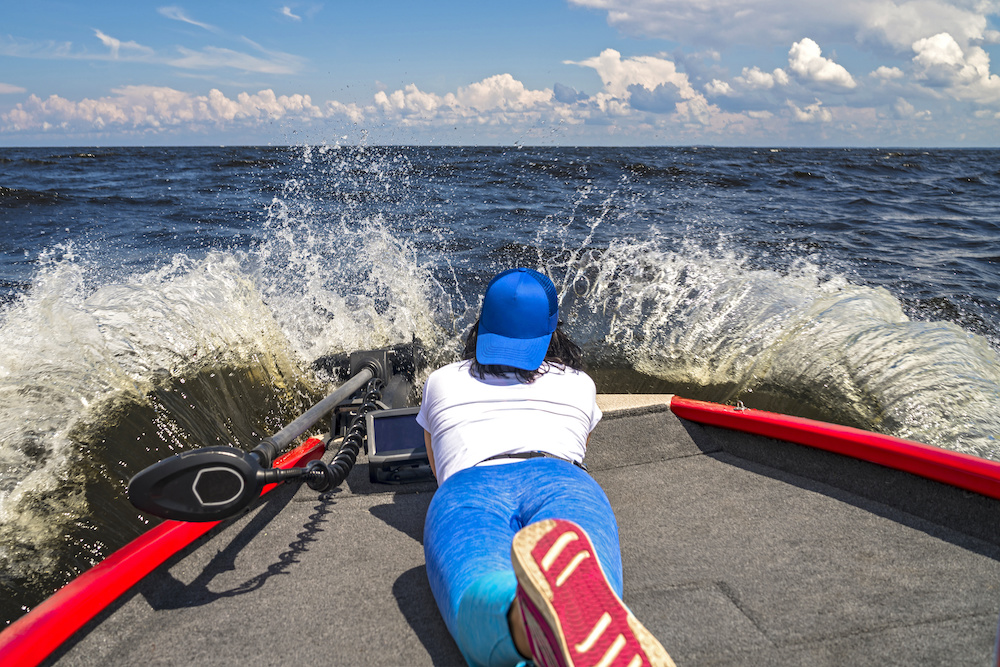 How to Read Lowrance Fish Finder

Recently gotten your hands on a Lowrance fishfinder? That’s awesome!

We can definitely understand your eagerness to get out on the water with it.

In fact, it’s not uncommon for people to head on fishing with their new device before actually learning how to make the most out of it.

As with any new tool, you would want to learn how to read Lowrance fish finders first so that you can decipher the data it’s showing you.

Worry not, as we’re here to guide you through the basics to help you learn how to read Lowrance sonar.

This way, you would well-equipped once you hit the water.

Quick Navigation
About Lowrance
How to Read Lowrance Fish Finder
How Does Sonar Technology Work?
What Does CHIRP Mean on Fish Finders?
How Do You Read a Fishfinder Screen?
Fish Arches
Underwater Structures
Bottom
How to Use Lowrance Fish Finder to Catch Fish
Catching Fish
Depth Range
Sensitivity
Fish Finding Confidence

Lowrance is a world leader in marine electronics and actually invented the world’s first consumer sonar device in 1957.

However, consumer electronics have come a long way since The Little Green Box, and today’s models are much more advanced.

Some of the ground-breaking features that Lowrance has include GPS navigation and C-MAP.

These technologies allow you to plot out and save an image of your underwater domain.

What’s more is that Lowrance is constantly evolving and innovating with it, offering users accurate information and higher-definition pictures than ever.

How to Read Lowrance Fish Finder

How to read Lowrance sonar technology is essentially the same as reading any other sonar fishfinder.

If you’ve ever owned a fishfinder before, even if it was a different brand, you should be able to read your new device easily.

On the other hand, if this is your first time using such a device, stick with us as we explain how to read a Lowrance fish finder and use it to catch fish.

Before we do that, let’s briefly look at how sonar technology works, so you can better understand what you’ll be looking at on the screen.

How Does Sonar Technology Work?

Your fishfinder transducer is effectively the eyes and ears of the operation, transmitting sound waves out into the water and monitoring their returns.

It then converts the sound energy it receives into electrical energy.

Once that’s achieved, it sends this information to the fishfinder’s display screen.

A lot can be learned from the length of time it took for the transducer to receive a return and the strength of the return.

Your display unit contains sophisticated software that decodes the information and displays it on the screen in front of you.

This is because these longer waves are able to penetrate deeper water.

Still, due to their length, they are likely to miss most smaller objects, including small fish.

High-frequency sonar transmits more frequent, shorter waves, which are much more suitable for shallow water and for detecting smaller fish.

They provide more detail, but the waves aren’t long or strong enough to map deeper water.

What Does CHIRP Mean on Fish Finders?

CHIRP stands for Compressed High-Intensity Radar Pulse and is invented in the 1950s by the US Navy.

However, CHIRP technology has only recently been made accessible to consumers.

As such, it allows you to see a much clearer image of what is in the water.

Dips and bumps on the bottom stand out more, and structure and fish are crisper and clearly defined. 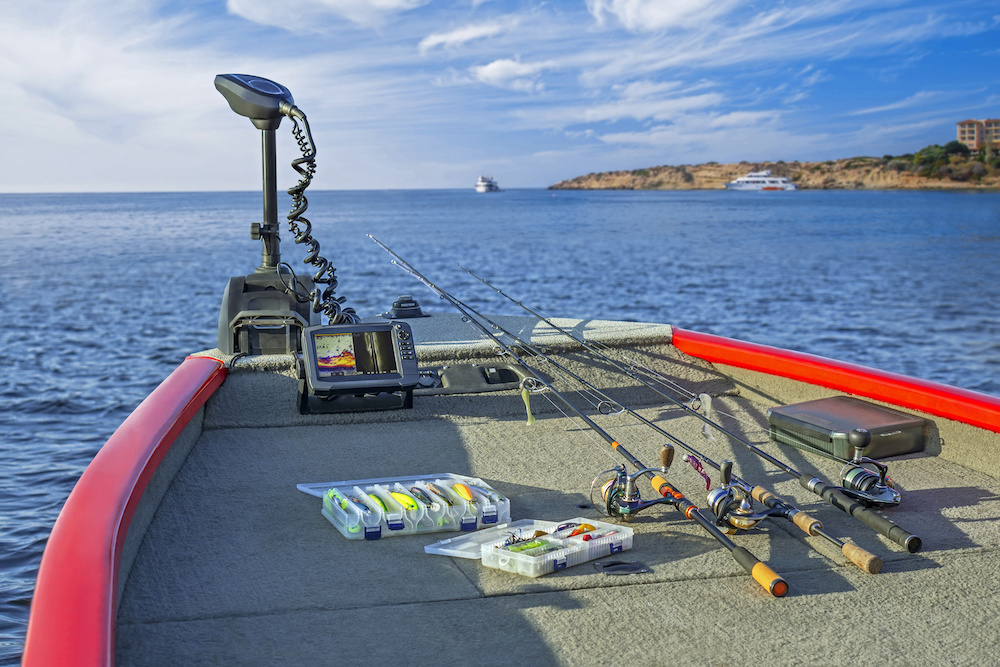 How Do You Read a Fishfinder Screen?

Your Lowrance fishfinder is going to show you a whole host of information on the display.

Most of it will mean nothing if you don’t know how to read it or what to do with the information, so it’s your job to learn.

The right-hand side of the screen will show you the latest information picked up from the transducer.

It will then slowly move off to the left.

You’ll see your current depth on the top left-hand side of the screen.

Depending on the model you have, the water temperature and your current boat speed may also be displayed.

The ascending numbers down the side help you estimate how deep the fish are when you see them.

It is a good idea to switch your fish finder on before you use it so that you can see what you have displayed.

You should also play around with the different features and settings to get to know your device and what it can do for you.

When you see fish on your display screen, they will appear as arches.

Yet, they won’t always look like a full arch; sometimes, you will have partial or half arches, too.

Don’t forget that the screen shows you a slice of the water column at a given time, with the newest information on the right.

Therefore, the length of the arch just tells you how long the fish was within your transducer beam.

A partial or half arch just means the fish didn’t swim all the way through.

Your Lowrance fishfinder will color-code the fish to help you see which ones are bigger (the color will depend on what setting you have it on).

Or, if you have an older grayscale model, you should look for the thickest arches.

The thicker the arch, the bigger the fish.

Baitfish will often appear on your screen as a series of dots or dashes, but they are almost always suspended just above the bottom.

If you see underwater structures, like vegetation, the best way to tell it is not a school of fish is by checking if it’s attached to the bottom.

If the echoes or marks are connected to the bottom, it’s most likely to be an underwater structure.

The water’s bottom will also be color-coded to help you identify solid or hard bottoms from murky, muddier bottoms.

A thick, darker line will indicate a solid bottom, while a thinner, lighter-colored line will tell you that the bottom is soft.

How to Use Lowrance Fish Finder to Catch Fish

They are incredibly user-friendly, and most of the latest models have touch-enabled screens, making the menus even simpler to navigate.

You can either use your fishfinder to find the right depth to fish, a structure to fish near in, or to actually find a school of fish.

If you are searching for a particular species of fish, then knowing what type of bottom the water has is also incredibly useful.

Fish habits will change throughout the season.

Once you have fish on your display screen, you can check the depth they are swimming at and place your bait right in front of them.

Your fishfinder will usually set your depth range for you.

Remember to take note of this, as it will affect how big the fish look on the screen.

If the water is very deep and you wish to just see the upper portion of it, you also have the ability to change it.

You can zoom in on specific depths, so if you know your fish like to hang out at 15 feet, you could set it to look at 12 to 18 feet.

This will give you a more detailed look at this particular portion of the water.

The ideal sensitivity will depend on how deep the water is and how turbid or murky it is.

The higher sensitivity you have it set on, the smaller fish it will be able to detect.

If the water is quite murky, though, it just won’t be possible to have it set too high.

As the transducers may put out false readings from all the algae in the water, your screen will be cluttered with too much activity to make sense of.

In times like these, just tune down your sensitivity until most of the clutter disappears.

Then, carry on as usual.

Check the product manual to learn more about the Lowrance fishfinder you have.

There may be a whole host of extra features on there that will help you catch more fish.

After learning how to read Lowrance fish finders, all you have to do now is get out there and put this theory into practice.

Identifying schools of baitfish and spotting sneaky fish hanging out on the bottom gets a whole lot easier with experience.

Once you get used to having a fishfinder aboard, you’ll feel a bit lost when fishing without one.

If you’re fishing from shore, you can even find cast-able fishfinders that help you see underwater.

You just cast them out and slowly reel back in to find out where the honey holes, drop-offs, and (hopefully) where all the fish are hiding out.