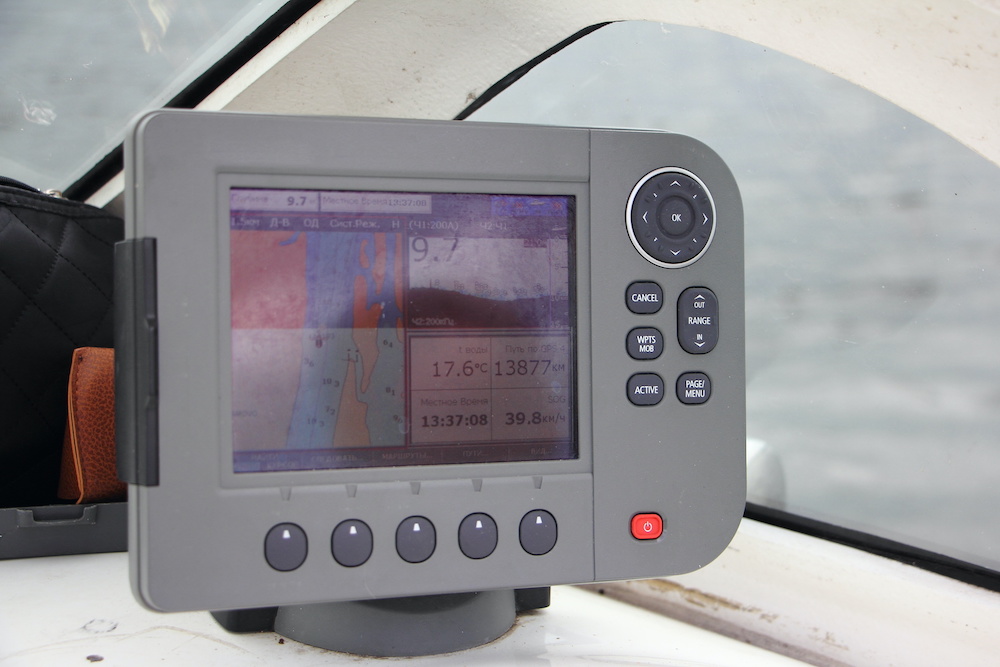 If you know how a fishfinder works, choosing which type of fishfinder will be best for your needs becomes easier.

That’s just the beginning, though.

After acquiring the device, you’d need to learn how to read sonar fish finders.

To do this, you have to gain an understanding of the basics of sonar technology.

It’s surprising how many anglers don’t really know how to use them properly.

Do not be part of that statistic.

Here, we’ll explain how fishfinders work and how to read them, including how to read CHIRP sonar.

How Do Sonar Fish Finders Work?

Learning how to read a sonar fish finder all starts with understanding how they work in the first place.

Fishfinders can map the underwater domain by using sonar technology, which stands for Sound Navigation and Ranging.

Your fishfinder will consist of a head unit with a display screen, whether colored or grayscale, and a transducer.

If you think of the main unit as the brains of the operation, the transducer is the eyes and ears.

So, what does the transducer do?

The transducer converts electrical energy received from the head unit into sound energy before transmitting it out into the water.

It has a piezoceramic element inside of it, which vibrates and emits sound at specific frequencies.

As well as transmitting sound waves, the transducer is also capable of receiving them.

The delay time and strength of the return signals are then converted back into electrical energy by the transducer and sent back to the computer unit.

The frequencies they operate on can make some more suitable for shallower, smaller bodies of water, and others for larger, deeper water.

Low-frequency transducers work by sending out fewer but longer waves of sound out into the water.

They can move deeper into the water because they’re longer, but the larger size of the waves also means they miss smaller objects.

For this reason, low-frequency transducers produce less detail than their higher-frequency counterparts.

Nevertheless, they are extremely useful when fishing in larger and deeper bodies of water.

They can help you identify where the underwater structures and potential honey holes are.

Also, when they do find a fish, you know it’s a big one.

They are not able to penetrate as deeply into the water, which is why this type of fishfinder is more suitable for fishing in shallower water.

The higher frequency of the waves also means that these can produce much more detail about the water below you.

This means they are perfect for finding smaller species of fish, such as crappies, bluegills, and perch.

Dual- or multi-frequency transducers can emit both low and high frequencies.

It’s even possible to find some that emit both frequencies simultaneously, giving you an even more detailed interpretation of what’s underneath.

The head unit or computer aspect of the fishfinder contains software that receives and intelligently deciphers the information sent to it from the transducer.

The delay time and strength of the return signals indicate objects that the transducer has detected in the water.

The head unit converts the information onto a display screen for you to read.

Some of the data it shows include water depth, nearby objects (underwater structures), and fish.

How To Read Sonar Fish Finder

It’s important to know that when reading a fish finder, the most recent information is displayed on the right-hand side of the screen.

The information then gradually moves to the left as it’s replaced with fresher data.

So, your screen is effectively showing you a slice of the water column over a period of time.

For the purposes of this tutorial, it’s easier to imagine that your boat is anchored so that you are stationary in the water.

Your fish finder will show you the bottom depth of the water you are in, usually on the top-left or right-hand side of the screen.

Because you are stationary in the water, the depth won’t change.

You can use the numbers that run down the side of the screen to read the depth of anything else in the water.

If you were moving around in the water, the bottom depth would constantly be changing.

You will be able to find drop-offs and honey holes in new bodies of water by trolling around slowly in your boat. 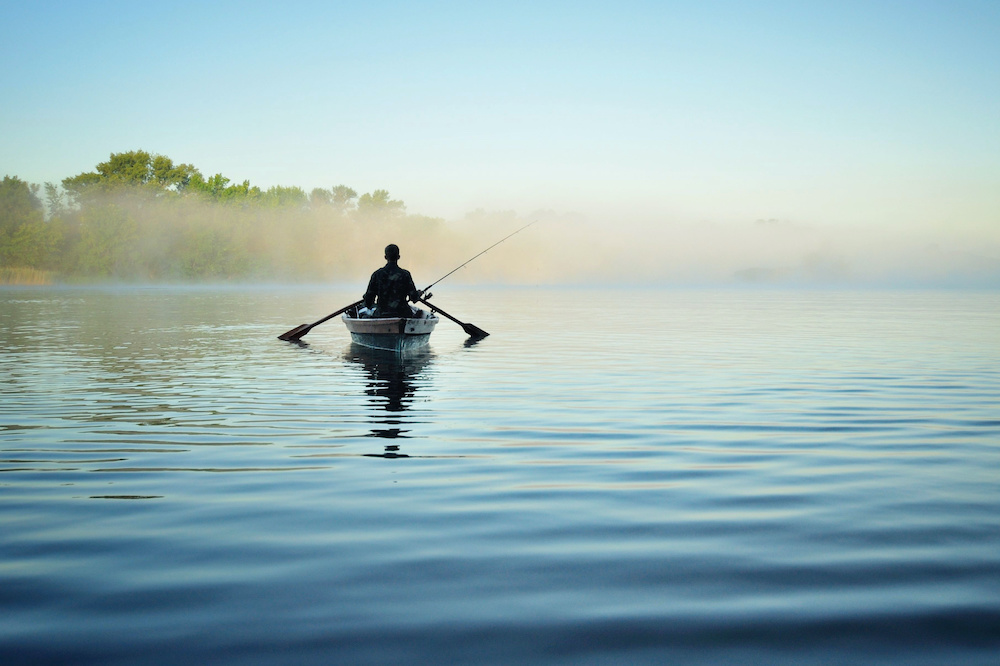 Depending on the type of fishfinder you have, the fish will either appear as fish icons or as arches on the screen.

Some fishfinders have Fish ID technology, which will display fish icons in the places it thinks fish are.

However, not even the most advanced units will be right 100% of the time.

Therefore, many keen anglers prefer to read the information for themselves.

If you don’t have Fish ID technology or have it switched off, then a fish will usually appear on your sonar display as an arch.

Remember, because the screen shows you underwater activity over a certain period of time, a longer arch doesn’t represent a bigger fish.

What a longer arch actually shows you is that a fish was swimming slowly through your transducer’s field of vision.

A shorter arch will be displayed for a fish that was swimming more quickly.

If a fish was stationary in the water below you, it would appear on your screen as a long straight line.

Also, a fish may only swim part of the way through your transducer cone’s vision.

In this case, it won’t appear as a full arch.

Along with full arches, you will also see part and half arches that may represent fish.

This means that the fullness or quality of the arch has nothing to do with size.

It is actually the width of the line you see that will tell you more about the fish size.

So, if you see multiple arches on your fish finder and wonder which one you should target, look for the thickest line.

If you are fishing for a particular species, however, it’s important to know more about their habits.

For example, you’d want to know the depth they like to hang out in and whether they want to be near underwater structures or at the bottom.

That way, you can be on the look out for fish appearing at these depths or in certain formations.

The more you know about your prey, the more educated your guess will be about what these arches might be.

Of course, not everything you see on your fish finder will be fish.

Your fish finder will also pick up brush and underwater structures.

The best way to tell underwater objects from fish is whether or not the item looks like it’s attached to the bottom or not.

Color displays are much easier for identifying brush, though.

The display will show the vegetation as a different color from the bottom.

Other objects can sometimes be identified by their shape.

Again, as a rule, if it’s attached to the bottom and stationary, it’s not a fish.

How Do You Read a Deeper Sonar?

How to read a deeper sonar is the same as any other sonar.

As long as you remember that the deeper or lower frequency sonar only picks up larger objects, you’re halfway there.

If you’re looking for water of a certain depth or a structure, you can slowly troll around with a wider beam on.

Then, when you think you’ve found something, set your cone to a narrow beam to get a clearer picture of what you have seen.

How Do You Read CHIRP Sonar?

CHIRP sonar fishfinders are widely accepted as the best fishfinders on the market at the moment.

Traditional sonar fish finders emit one standard frequency out into the water (either low or high), but CHIRP sonar emits a continuous stream of waves.

This continuous transmission includes a range of frequencies, low to high, offering a much more comprehensive range of information.

CHIRP sonar is also able to do this with around 10 to 50 times more energy than traditional sonar, even though it often transmits at lower peak power.

This is because what you will see on your CHIRP display will essentially just be a much crisper and clearer image of what is in the water below you.

CHIRP sonar can be used in shallow and deeper waters, but anglers in deep water will see the most benefit.

Why? Because CHIRP can pick up smaller fish.

It can also use the extra information to more intelligently decipher between underwater structures and your fish targets.

How to read sonar fish finder is pretty simple in application, as you just need to look for the arches.

Nonetheless, with a little practice and experience, you’ll be able to glean a lot more information than just “FISH”!

Taking your fishfinder to your favorite spots with you will help you understand what the fish look like on your display.

We also recommend reading the manual that came with your unit to get to know the unique features it offers.

Many fishfinders have depth alarms and zoom capabilities that can come in really handy, too.