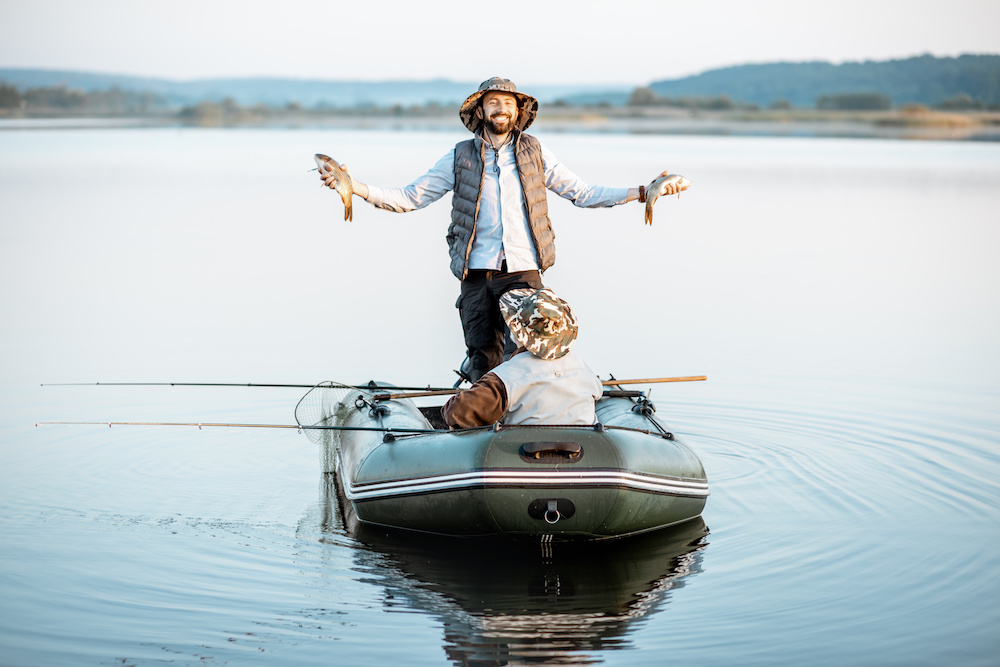 What Is Down Imaging on a Fish Finder and How Does It Compare to Other Sonar Technologies?

In the case of a down-imaging sonar, pulses are released from top to bottom or vertically. Scanning direction is also among the ways fish-detection technology is classified.

So how does down imaging match up to other types of sonar technology? Also, where does side imaging fit in the picture?

Today, we’ll answer these questions and more as we reveal the full capabilities of a down-imaging fish finder.

What Is Down Imaging on a Fish Finder?

Down imaging is among the new fish-detection technologies competing with the traditional 2D sonar.

Though based on many anglers’ personal experiences, it would seem there is no competition, as down imaging clearly beats its conventional counterpart in all the ways that matter.

Of course, the “ways” we’re talking about here are in detecting and catching fish. Aside from knowing what is down imaging on a fish finder, what else does one need to know about down imaging?

How Does Down Imaging Work?

The type of sonar known as down imaging combines conventional side sonar and down sonar imaging to come up with an image that’s as close to the real thing as you can get.

Hence, it gives you a picture-like display of fish targets and the underwater structures around them.

Humminbird is among the most popular providers of down imaging today.

Like your traditional sonar returns, down imaging shifts from right to left based on the current information displayed on the screen’s right side.

This type of sonar technology also confirms and identifies scenarios underneath your vessel.

When used with side imaging and switch fire, it can turn into an all-around tool that helps you lure in more fish.

While side sonar sends out signals to the side of the boat, down-imaging sonar picks up what’s directly below the boat.

With information from both these technologies, you get quite a clear picture of the weedline and know what has to be done to get a closer look.

Can You See Fish on Down Imaging?

Down imaging is among the new-fangled fish finder technologies used to detect fish these days. So yes, it does allow you to see fish very clearly.

If sonar detects something really interesting at the bottom, you want to power on down imaging quickly to get a clearer picture.

Down imaging is something that pairs well with side sonar, so you might want to set up both these types of screens when you go fishing.

When shifting back and forth from traditional sonar to down imaging, movement is critical to capturing a clear image of the targets beneath.

As a result, you must keep the boat moving when using this arrangement. Boats that are sitting still won’t bring the clear images of fish you’re looking for.

What’s the Difference Between Down Imaging and Sonar?

The image you get from a down imaging sonar’s screen actually provides details that allow you to draw the target accurately.

Thus, you can verify fish easily and know if they’re what you’re looking for or not.

Basically, everything underneath your vessel is revealed with a high level of clarity using this technology.

This kind of sonar gives you confidence and gets rid of obstructions that could potentially ruin your overall fishing experience.

What Is Side Imaging on a Fish Finder?

To acquire the information we need about down imaging means exploring how it compares to side imaging, so there’s a need to dig a little deeper on side imaging sonar.

Side imaging has become hugely contributory to an angler’s productivity in the water. It sends out a razor-thin beam underwater on both sides of your vessel to cover the bottom plane.

Returns from side imaging may appear as photographs, but they neither depend on light nor darkness to create an image.

Any forms of natural structure, bait fish, or even underwater wreckage can be displayed clearly through side imaging.

Furthermore, the type of bottom doesn’t affect the side imaging sonar’s returns. It could be mud or silt at the bottom, and the image will always come out detailed.

Of course, not all side imaging sonars are created equal. Some, like those preconfigured by Humminbird into their fish finders, offer higher quality images than others.

The top brands’ side imaging technologies can also run on both saltwater and freshwater, which is normally a feat of top-tier fish finders.

Additionally, side imaging differs from traditional sonar because it has a top-to-bottom movement; conventional sonar moves from side to side.

Another thing you might want to know is how these movements impact your fishing experience.

Basically, it means your photos using side imaging technology will appear at the top of the screen instead of the side.

How Does Side Imaging Work?

Side imaging works by identifying your targets’ shadows. Whether it’s an underwater structure or a fish on the move, its presence is reflected back onto the sonar’s screen via its shadow.

Most objects situated at the bottom typically give off a bright spot that’s translated into “dark sonar shadow” by your equipment. This shadow effect is a result of sonar energy reflecting off the object.

Through the object’s shadow, one can acquire information about its height and shape more accurately than traditional sonar.

Though what’s interesting about side imaging technology is how it represents schools of bait fish. It normally depicts these schools of fish as a cluster of tiny dots on the screen.

For most side imaging sonar models on the market, white streaks or lines are usually used to indicate larger fish species' movement.

However, Humminbird is one of the exceptions, as it typically shows the white streak accompanied by a shadow to indicate the presence of large individual fish.

“Hardness” of the Fish in the Water Column

Connected to the shadow effect given off by the fish is its “hardness.” Hence, you can usually figure out the latter by analyzing the former.

Specifically, you assess the distance of the shadow from the target. The screen shows you how far the fish is from the water column in feet.

The fish will show up on the large part of the screen, which depicts them as a white, hot beam. As a result, there is no way you can mistake fish for something else.

If it’s a stick or a limb detected underwater, then it’s going to appear as just that. The screen will indicate the object’s dullness, telling you there’s no way it could be a fish.

Is Down Imaging or Side Imaging Better?

The down imaging vs side imaging discussion has been one many anglers have struggled to find a conclusion to.

In essence, these two have to do with the direction of sonar wave emission. As their names suggest, down imaging moves from top to bottom, while side imaging shifts from side to side.

Hence, they each cover areas the other doesn’t, making complete coverage of the water below when combined together.

For directing sonar waves beneath your boat, the advantage goes to down imaging vs side imaging.

Alternatively, for releasing signals to the sides of your vessel, you’ll have more benefits using side imaging vs down imaging.

Thus, this really isn’t about side imaging vs down imaging and vice versa; it’s about how each sonar technology has perks that you can use to enhance your fishing experience.

How Down Imaging Factors Into Your Fishing Experience

In what ways does a down imaging sonar improve your productivity in the water?

Here are some of the most notable ones:

Down imaging is particularly advantageous if you’re looking to fish in deeper waters. That’s because you’re more concerned about detecting fish on the vertical plane rather than the horizontal one.

Capturing Images While in Motion

What’s great about down imaging is that it can deliver near-perfect images even when you’re on the move. Conversely, side imaging requires you to go a bit slower to capture a good image.

How Side Imaging Impacts Your Fishing Experience

Should you opt for side-imaging technology, expect to gain the following perks:

The side-to-side scanning motion of side-imaging fish finders allows you to scan the water faster.

This level movement also covers twice as much ground as the vertical motion of down-imaging sonars.

A Better Picture of What’s Going on Down Below

You get a clearer picture of the goings-on underwater with a side imaging sonar since their point-of-view is more extensive.

Shallow water means you don’t need to do much vertical scanning. Side-imaging fish finders ensure that the areas surrounding your fishing spot are covered thoroughly.

The good thing about modern-day fishing is that it’s a lot less restrictive. If you have a diverse fishing style and like to change things up now and then, there are fish-finder options for any path you choose.

There’s the traditional 2D sonar for a no-fuss fishing experience, a side imaging sonar for shallow-water expeditions, and a down imaging fish finder for deep-sea excursions.