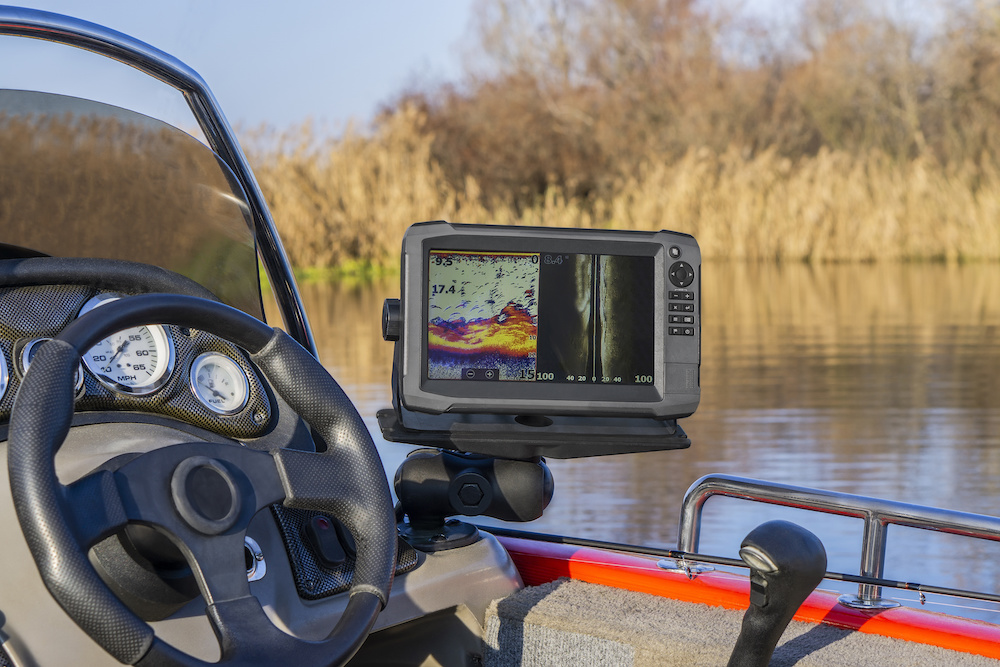 How to Use a Fish Finder: An Introductory Guide

As a keen fisherman, you’re bound to have favorite fishing spots and trusty honey holes that you’ve been using for years.

Then again, if they suddenly stop producing as many fish, a fishfinder will be a massive help in finding new spots to try.

It will also come in handy when visiting new areas, as it will help you know the depth you’re fishing in, as well as where all the fish are.

Knowing how to use a fish finder properly is key in ensuring you get the most out of your handy device.

Stick with us as we teach you the best fish finder tips and tricks.

How Does a Fish Finder Work?

Fishfinders use sonar technology to help you locate fish and underwater structures (where fish like to hang about).

In addition, they also tell you the water’s bottom depth.

They work by detecting pulses of sound energy that have been reflected by objects underwater.

An electrical pulse is transmitted to an underwater transducer, which then converts it into a sound wave and sends it into the water.

The information returned will depend on both the power and frequency of the pulse transmitted.

When the sound wave is bounced back to the receiver, your fish finder will be able to calculate the distance of the object it bounced off using the time lapsed.

The most powerful fishfinders can send out up to 40 pulses per second.

Then, the software in the device will use this data to map out the water beneath you.

It is designed to intelligently decipher the data received to work out which objects are stationary, which are moving, and which might be fish.

The type of fishing you are doing will affect whether you want a fish finder that has a low or high-frequency transducer.

The transducer is effectively the eyes and ears of the fish-finding system.

The frequency it operates at will affect whether you can see more clearly at closer ranges or less clearly but with a more extensive range.

Low-frequency fishfinders have a lower amount of sound waves being transmitted each second.

They won’t return as much detail as a high-frequency device, but they have longer sound waves and usually wider beams covering much larger areas.

This helps you find underwater structures where fish usually like to hang out.

This type of fishfinder will also help you find bigger fish, as smaller fish simply won’t be detected.

Lower frequencies work much better in deeper water because they can generate more energy at greater depths.

However, they have shorter waves that are able to offer the user more detail in smaller areas of water.

The extra detail is very useful for fishing in shallower water and identifying smaller panfish swimming right underneath your boat.

Dual- or multi-frequency fishfinders use a piezoceramic element within their transducers, which is like a vibrating crystal.

It allows the transducer to send and receive pulses in two or more different frequencies, sometimes at the same time.

Dual-beam and quadrabeam transducers utilize more than one piezoceramic element, sometimes aiming them in different directions.

What Does a Fish Look Like on a Fish Finder?

Using a fish finder is simple when you know how it’s done.

How to spot a fish on your fish finder will depend on what kind of fishfinder you have.

First, we’ll take a look at how different fishfinders work, and then we’ll show you how to use fish finders effectively to help you catch fish.

An 83kHz beam will have a narrower beam with more detail against a 200kHz beam that will have a larger cone offering broader area coverage.

The transducer is constantly transmitting and receiving data.

And the newest data will appear on the right-hand side of the screen, slowly moving to the left.

If your boat is anchored, then the depth won’t be changing.

So, when a fish swims across your transducer’s field of “vision,” it will appear as an arch or round mark on the screen.

If there is brush beneath you, it can sometimes appear to be a school of fish (or a mess of blobs).

You can usually tell that it’s brush instead of fish because it will be attached to the bottom.

Some fishfinders have fish ID technology built into them, and they use fish icons to show you where the fish are.

They usually have similar icons for plants, schools of fish, and rocks to help you understand what the sonar might be reading from the water.

The fish icon used will tell you a rough estimate of the size and length, and you will also have a number above their head to show you how deep they are. 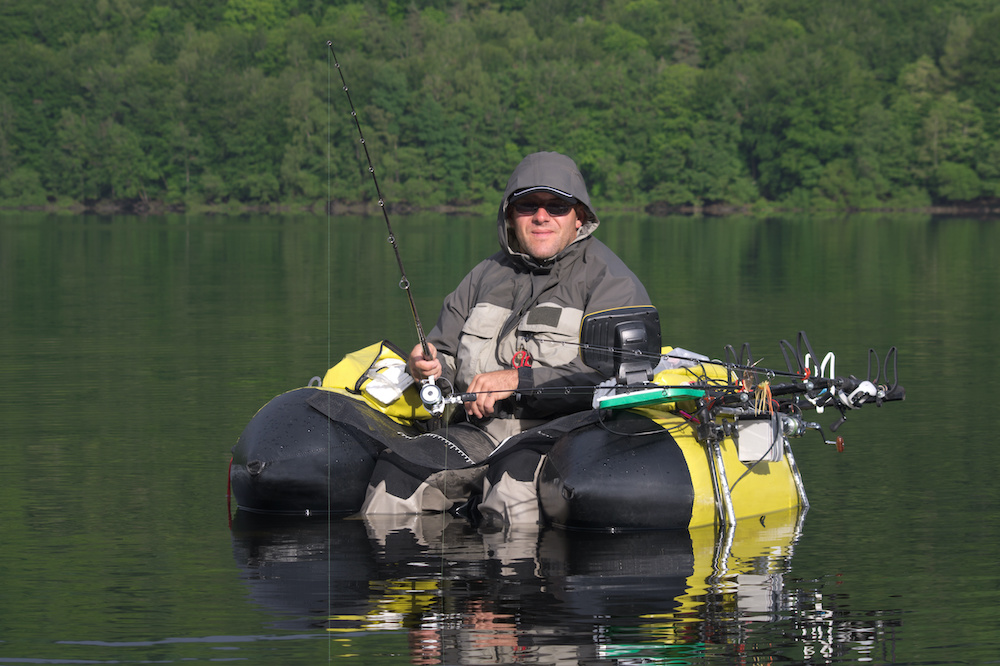 When it comes to down imaging or down scan fishfinders, the fish will look the same as on 2D sonar but will appear smaller.

This is because the down scan provides a narrower slice of the water column.

Panfish, such as crappies, will appear like small ovals and circles.

You’ll mostly spot them around underwater structures and weeds.

You will often see these shapes stacked up on top of each other, as that’s the way crappie schools swim together.

Schools of bass will make slightly larger shapes, appearing at the bottom of the screen as they tend to hang out at the water bottom.

In side imaging, the beam is looking out to the side instead of directly overhead, which can make fish a little more challenging to spot.

A fish will appear as a brighter return, usually with a sonar shadow.

If the water has a soft bottom, the fish will appear even brighter.

The closer the fish is to the bottom, the harder it will be to see, especially if the body of water you are on has a hard bottom.

Baitfish will look like cotton balls on the screen.

How to Use a Fish Finder With GPS

Using a fish finder with GPS is great for navigating, finding new fishing areas, and mapping out new bodies of water.

So, once you’ve sailed, paddled, or engine-powered around a lake once, you’ll have all the data you need to successfully fish there.

As you drive around, it’s incredible to watch as the underwater map appears on the fish finder’s screen right in front of you.

You can also mark your favorite spots to return to them again later.

How Do You Use a Fish Finder Effectively?

Learning how to use fish finders successfully is not just knowing how to read them, so check out our tips and tricks below.

Here are our six top tips and tricks for using a fish finder more effectively.

Tip 1: Learn How to Read the Temperature

Fish are particularly sensitive to water temperature because they can’t regulate their own body temperature.

Some favor cold spots, while others favor warmer waters.

By learning what kind of water temperature the fish you’re trying to catch prefer, you can easily spot them on the fishfinder.

Learn how to detect temperature changes on your fishfinder to zone in on the fish you want.

As with temperature, fish also have the tendency to hang out at different depths.

Therefore, knowing what depth your target species of fish like is also key.

Once you properly understand what types of fish are at what depths, you can use your transducer to target them more effectively,

Some anglers are unaware that their fish-finding device has a zoom feature on it.

The zoom function allows you to analyze what you are looking at in more detail.

You should also have the ability to adjust the sensitivity of your fishfinder.

If the water you’re fishing in is particularly turbid or murky with thick algae growth, you may wish to tune your fishfinder down.

This will essentially make it less sensitive.

Why is this important?

If you have your fishfinder’s sensitivity tuned too high, you’ll see a lot of clutter on the screen because the algae will confuse the device.

The trick is to tune it down until the majority of the clutter disappears.

Many fish finders have automatic tuning, and if you don’t know what you’re doing, it may be best to leave it to the technology.

The very best way to use your fishfinder more effectively is to simply learn how to operate and read your specific model of fishfinder to the best of your ability.

This means studying the owner’s manual, or if you’re lucky, they might have made a YouTube video for you to watch.

As if you need an excuse to go out fishing more often.

Nevertheless, going out fishing with your fishfinder as often as possible will help you learn how your device works.

The more you use it, the more you’ll begin to understand what the sensors are telling you

In turn, you will be able to correctly identify brush from schools.

Now you know how to use a fish finder and how to identify fish on the finder’s screen.

It really is just a case of getting out there and gaining experience.

A fish finder with GPS has a massive advantage over other fish finders, as you can get to know larger bodies of water much more quickly.

By plotting yourself an underwater map, you can predict where certain fish are likely hanging out more accurately.

And then when you’ve found them, don’t forget to mark your spot for next time.